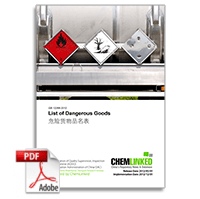 In replace of its 2005 version, GB 12268-2012 mainly presents the whole list of dangerous goods, introduces the structure of the list and lays down other related requirements.

The List of Dangerous Goods lists the most common dangerous goods during the process of transport, storage, sale, distribution and other related activities, which is intended to cover, as far as practicable, all dangerous substances and articles of commercial importance. However, the absence of a substance from such a list does not mean it can be offered for transport without special restrictions. New goods which present danger still need to be evaluated before transport though they are not in the List.

Chapter 4 (except 4.2, 4.6) and Chapter 6 (except special provisions in Table 1) in this standard are mandatory, the rest of which is recommendatory.

It should be noted that this standard corresponds with UN Recommendations on the Transport of Dangerous Goods-Model Regulations Part 3: Dangerous Goods List, Special Provisions and Exceptions (the sixteenth edition).

Compared with 2005 version, the following changes have been made:

2) The structure of the List of Dangerous Good is adjusted: the column “special provisions” is added to replace the column “remarks”.

Meanwhile, three parts in GB 12268-2005, including the Appendix A assignment and compatibility groups of explosives, the Appendix B precedence of hazards and the packing groups of dangerous goods, are removed.

4) An “index”, is a list of dangerous goods in the sequence of Chinese Pinyin, is added. Substances and articles beginning with numbers, English and Greek letters are listed in the front of the index which covers information on the Chinese names and descriptions, English names, classes and division as well as UN numbers of dangerous goods.

This standard is proposed by the Ministry of Transport of the People’ Republic of China.

This standard is under the jurisdiction of the National Technical Committee 251 on Dangerous Chemicals Management of Standardization Administration of China (SAC/TC 251).

The drafting unit of this standard is China Waterborne Transport Research Institute.