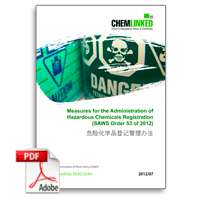 July 1, 2012, China State Administration of Work Safety published the final version of the revised legislation on hazardous chemicals registration. As one main supporting law under the Decree 591, this new regulation has taken effect since August the 1st this year and will replace its predecessor version that had been released in 2002 by the former State Economic Trade Commission, a comprehensive administration set up in 1993 and repealed in 2003.

Revision on this regulation entered a substantial phase in October last year when the SAWS put forward on its website a revised draft for a near 40-day public consultation. In May 2012, the final version was adopted on the agency's director-level meeting and later endorsed by the SAWS director in chief on July 1, as the ministerial decree - "SAWS Order 53".

Subsequent to near 10 years’ practice of the existing registration model for hazardous chemicals, the revision greatly promotes the implementation of GHS in China and hazardous chemicals importers have been incorporated into the registration obligation for the first time. Affected importers are now obliged to register the hazardous chemicals, prior to its first import in China, with local registration offices affiliated to their corresponding competent authorities of work safety. They will also face escalated compliance urgency on GHS hazard classification, labeling, SDS making/updating and more visible regulatory concerns like hazard identification and risk control measures.

In the middle of July 2012, the NRCC-SAWS released eight application or procedure related documents for a 10-day public comments. The eight documents are used to support the implementation of SAWS Order 53.  Consultation on these documents ended on July 25, 2012.

It is used for producers and manufacturers to input required registration information, including 9 tables and one guidance on how to fill the tables. It is worth noting that if a company applicant is engaged in both production and import of hazardous chemicals, he shall be regarded as a producer/manufacturer applicant for the registration.

It is used for importers to input required registration information, comprised of 7 tables and guidance on how to fill the tables. Importers herein are classified into two types: importers that use a hazardous substance (“HC users” in short), and importers involved with the trading operation of hazardous chemicals (“HC traders” in short).

Application Form for all Subject Companies

This brief sheet contains mainly information about the Industry and Commerce Business License number and the responsible personnel information who arranges the registration.

Application From of Renewal Registration

This sheet is used for HC registrants that apply for a renewed registration when the original certificate is going to expire. Companies shall be aware that each registration certificate has a validity term of 3 years and has to be renewed 3 months before the expiry date if they want to continue with the manufacturing or import.

Notice of Not Accept the Registration Application

This document is issued by the NRCC-SAWS to inform a company applicant why his application is rejected.

This document is issued by NRCC-SAWS to demand additional application documents when the previously submitted materials are not enough to conclude on the registration.