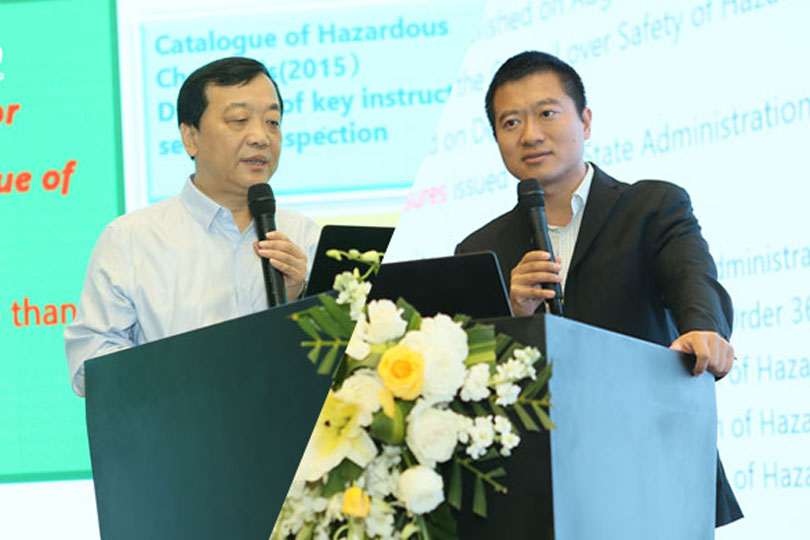 In 2018, China’s chemical industry raked in considerable revenue and profit: total revenue for the sector was RMB 12.4 trillion, entailing a yoy increase of 13.6%. Total profit reached RMB 839.38 billion, up 32.1% from the previous year. Its performance is also impressive in relative terms globally: with a global market share of around 40 percent, it has been the world’s largest by output since 2010, and its growth makes up half the growth of the global chemical market. Nevertheless, the growth of China’s chemical sector also poses considerable challenges from an environmental and health and safety perspective.

By the end of 2018, China was home to 96,000 chemical enterprises, including 16,000 which engage in hazardous chemical production. The large number of businesses and great variety of chemicals involved confer considerable challenges to regulators and policymakers.

During the Chemical Regulatory Annual Conference 2019 held by REACH24H in Xi’an, Mr. Lu Nianming, Vice Chairman and General Secretary of the China Chemical Safety Association, reviewed the status quo of chemical industry safety in China. He enumerated a set of institutional efforts made by the central government, including the introduction of the Regulations on the Control over Safety of Hazardous Chemicals (Decree 591 [1]) and the China Inventory of Hazardous Chemicals (2015) (see CL translation [2]), as well as stringent measures imposed to enhance accountability. Meanwhile, various documents have been published to prompt chemical enterprises to assume primary responsibilities for safety issues.

Although the number of accidents has dropped noticeably with these arrangements in place, serious and major accidents still occur from time to time. According to Mr. Lu, the year 2018 alone witnessed 13 serious or major chemical industry accidents which caused 88 dead and hundreds injured. The Xiangshui explosion this year was a huge wake-up call as well.

Following Mr. Lu, Mr. Chen Jinhe from the National Registration Center for Chemicals (NRCC) under the Ministry of Emergency Management elaborated on recent updates in hazardous chemical regulation and registration arrangements in China.

In terms of hazardous chemical regulation, Mr. Chen noted that besides major legislations, standards and inventories, a package of supporting measures have been taken to enhance control of safety risks and prevent major accidents. For example, IT-enabled systems and mechanisms have been applied to a broader spectrum of areas, including “One Map and One Table” to ensure nuanced supervision of safety risks associated with hazardous chemicals, electronic tracking and identification systems to enable traceability of hazardous chemicals, and monitoring and early-warning systems to make timely contingency responses possible. Notably, Shandong Province, as the only one nationwide, has been carrying out a pilot program for establishing the monitoring and early-warning system for safety risks associated with hazardous chemical production. The system is expected to be put into operations this October to enable dynamic supervision of major hazard installations for hazardous chemicals as well as real-time warnings.

(One Map and One Table)

Mr. Chen also noted that the NRCC is considering to issue electronic hazardous chemical registration certificates which will have the same legal effect as those in paper forms.

Tags : ChinaChina HazchemRegistration/notificationHazchemChemical management
Copyright: unless otherwise stated all contents of this website are ©2022 - REACH24H Consulting Group - All Rights Reserved - For permission to use any content on this site, please contact cleditor@chemlinked.com
READ MORE
MOST POPULAR
HOT TOPICSMORE